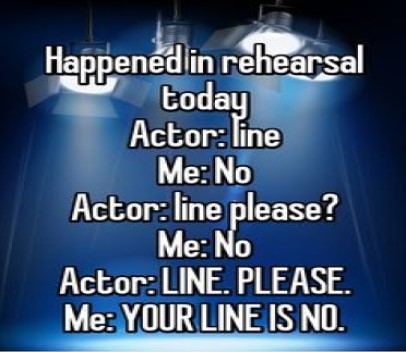 August 31, 2021
News, Past productions, SpotlightComments Off on TO PROMPT OR NOT TO PROMPT ?

Like a tightrope walker who knows he may not need the safety net, but feels safer in the knowledge that it is there, so some actors feel the need have a net of their own. It is not one the audience will see, but it is one that, if used, they will hear. 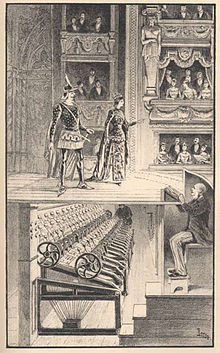 The prompter (sometimes prompt) in a theatre is a person who prompts or cues actors when they forget their lines or neglect to move on the stage to where they are supposed to be situated.

In truth, there is nothing better than knowing your lines. I do not just mean in an ‘Oh, I knew this yesterday,’ kind of way, but an ‘I know these lines so well, they’re almost part of me’. For an actor, learning the lines is where you start not where you finish. It is the least a paying audience deserves. It is only when books are down, faces lifted out of scripts and eye contact made that  the real work can begin with your fellow actors, and relationships built.

A 19th-century prompter at work.

If you have ever taken a prompt, you will know the feeling. The lurch of the heart as the words fail you and the seemingly eternal wait for the prompt to notice. The look of panic in the eyes of your fellow cast members. What do they do, cover for you, and wait for the line to come? The scene becomes a frozen tableau of inaction, everyone waiting for something to happen.

An audience may tolerate a prompt or two ( it happens to the best of professional actors). They feel embarrassed for you, nervous that you will do it again. Perhaps even, dare I say it, disappointed? Far better to know your lines so well, that you can recite them in your sleep (actually, reciting them as you fall asleep is often a good way to make them stick – you will be surprised by how much is retained in the morning). Far better for you and your cast members to know the play so well that, should the worst happen, you can get back on track. The greatest thing a rehearsal process can bring to a cast is the feeling of trust.

Directors; be brave. Tell your cast from the first rehearsal, that they will be performing without a prompt. Tell them they will not need it, and then see how hard they work to fulfil your prophecy. They will amaze themselves.

Remember, your audience want you to succeed.

Why not reward them by doing just that?