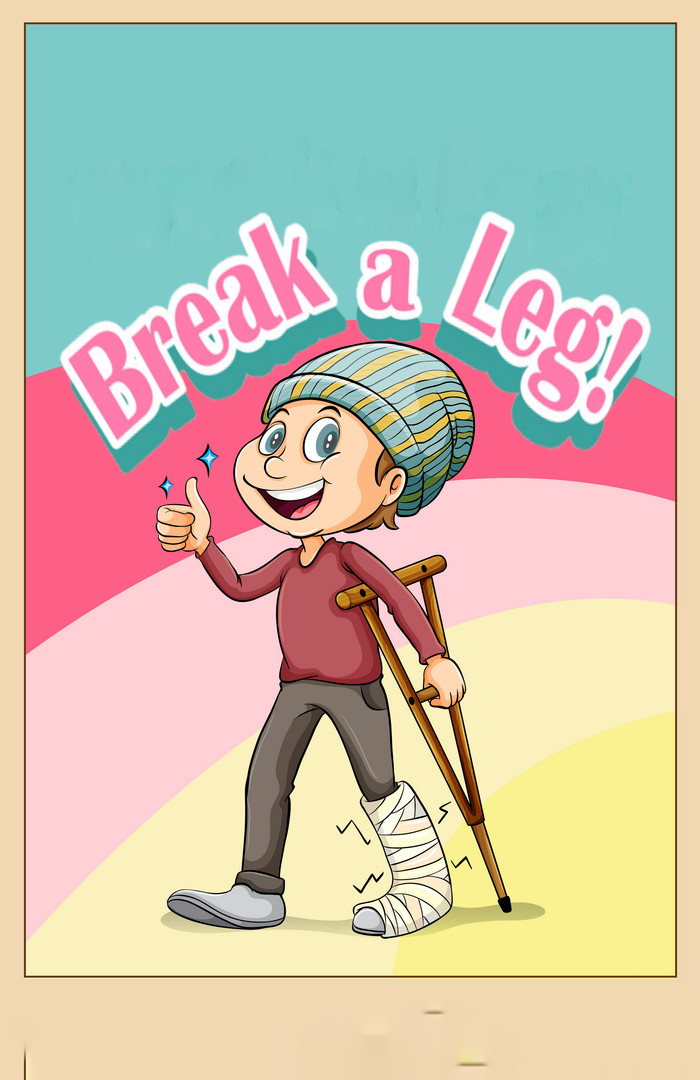 August 11, 2021
News, Past productions, SpotlightComments Off on BREAK A LEG DARLING, YOU’LL BE FABULOUS!

THE ORIGINS OF ‘BREAK A LEG’

Why do they say, “Break a Leg “in Theatre?

If you have been to a theatre performance, odds are you have heard the term “break a leg,” and maybe even used it to wish performers good luck. It may seem odd, but in the theatre world, saying “good luck” is considered to bring bad luck. There are numerous ideas about the origin of the phrase. One story says spirits wreak havoc on your wishes and make the opposite happen. Another comes from ancient Greece, where the audience did not clap but instead stomped their feet to show appreciation. If the audience stomped long enough, they would break a leg. Some say the term originated during Elizabethan times when, instead of applause, the audience would bang their chairs on the ground — and if they liked it enough, the leg of the chair would break.

The term “break a leg” may refer to a performer bowing or curtsying to the audience in the metaphorical sense of bending one’s leg to do so. The saying could originally express the hope that an enthusiastic audience repeatedly calls for further bows or encores. This might cause a performer to “break” the leg line. Much earlier in stage history, when superstition had a less frightening hold on the craft, actors and their followers used a more gracious greeting: “May you break your leg,” by which it was meant that the evening’s performance would be of such grandeur that the actor would be obliged to break his leg – that is, bend his knee – in a deep bow acknowledging the audience’s applause.

The Performer Breaking the Leg Line

The most common theory refers to an actor breaking the “leg line” of the stage. The edge of a stage just beyond the vantage point of the audience forms a line, imaginary or actually marked, which is called the “leg line,” named after a type of concealing stage curtain: a leg. For an unpaid stand-by performer to cross or “break” this line would mean that the performer was getting an opportunity to go onstage and be paid; therefore, “break a leg” might have shifted from a specific hope for this outcome to a general hope for any performer’s good fortune.

Evidently, in the days of early vaudeville, the producers would book more performers than could possibly perform in the given time. In order to ensure that the show did not start paying people who do not actually perform, there was a general policy that a performer was NOT paid unless they actually performed on-stage. Nowadays the term is used to wish an actor all the very best for a good performance and a successful run. No matter which version you choose to believe well wishes are always appreciated and as amateur performers, we still use the term. Invariably, producers, directors and fellow cast members pop their heads around dressing-room doors for a quick chat and a cheery,